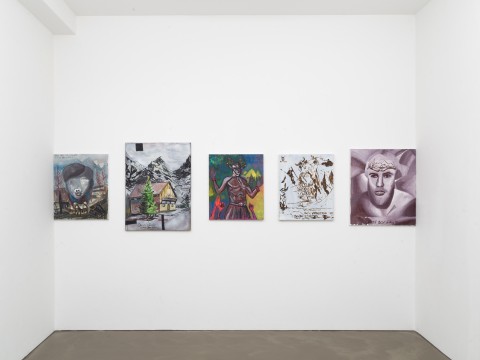 With the seventh edition of BACKSTAGE we are celebrating a double anniversary. On 7 September 2001, at Torstrasse 230 in Berlin-Mitte, on the same site where the project space Maschenmode had previously existed for two years, the gallery that emerged from it, Galerie Guido W. Baudach, opened its first exhibition: Down the Hollywood Line by Andreas Hofer. For Hofer, who would later adopt the artist name Andy Hope 1930, this was also the first solo show in a gallery.
On the occasion of the 20th anniversary of the exhibition and the simultaneous gallery opening, we are presenting Downhill Rides and Other Stories, a five-part group of paintings by Andy Hope 1930. The works, which were created in loose succession between 2007 and 2011 and are exhibited here for the first time, initially appear as bizarre landscape fantasies with weird-looking figure staff, that cannot be pinned down to any particular painterly style, but could come from the storyboard of an arty splatter movie. By means of the mountain motifs found throughout and against the background of a concrete autobiographical reference - Andy Hope grew up partly at the foot of the North Tyrolean Alps -, the paintings deal with the tension between modernism and tradition as well as between high and low in Western culture. By this, they feature that recontextualising mix of references to comic, avant-garde, folk art and pop for which the artist and his practice have become internationally known over the last 20 years.

BACKSTAGE is a new format launched at the beginning of this year, within which Galerie Guido W. Baudach regularly highlights special individual works and series by one or thematically selected works by various artists, independently of the regular exhibition program and both physically in the showroom and virtually online on the gallery's website.