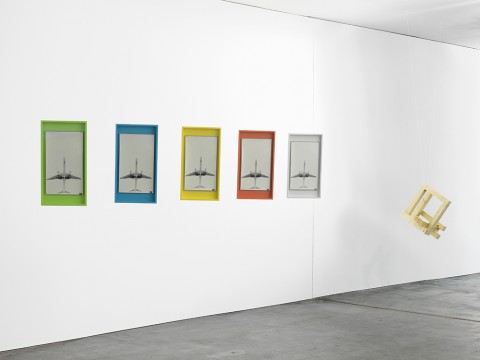 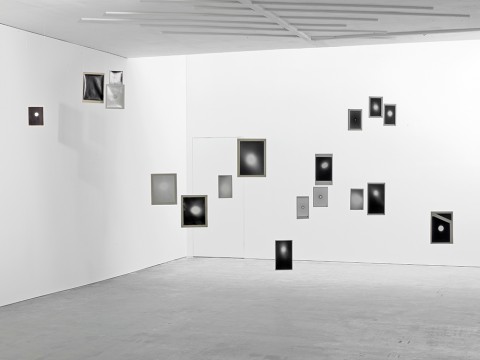 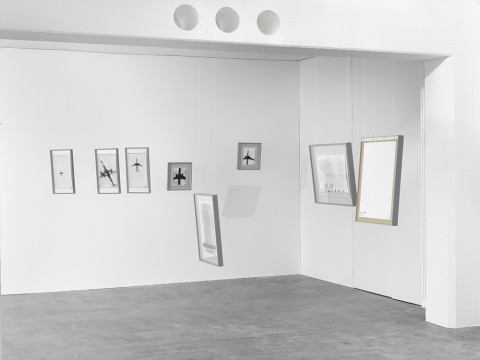 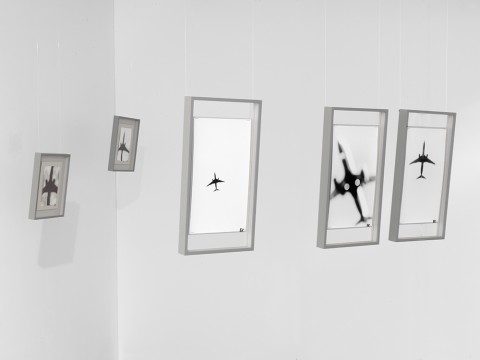 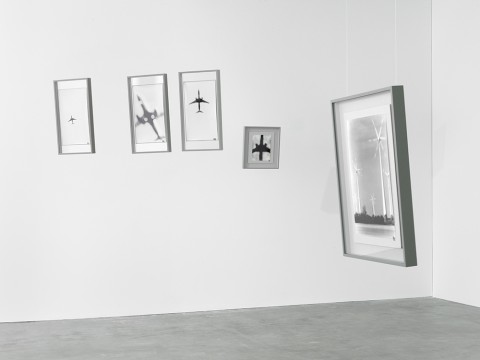 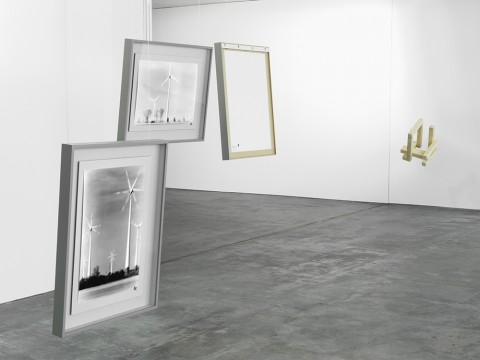 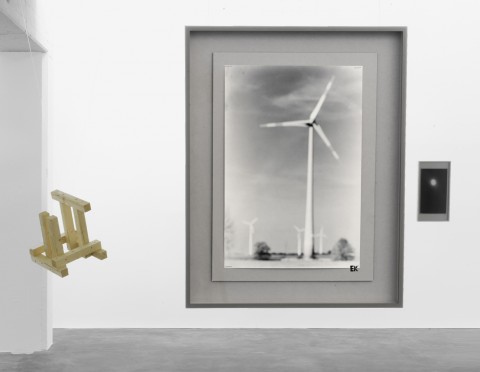 Drawing on the form and content of his 2011 exhibition, very, the works in Kneihsl’s present installation also hang freely in the air, suspended from the ceiling. The emptiness of the space is given form, the walls are left entirely unused. The specific arrangement of the works into rows and layers generates various intersecting visual axes that either work with the given architectural situation or coexist with it in reciprocal tension.

The majority of motifs in Kneihsl’s new images – familiar small format black-and-white photos stapled to grey cardboard – are also borrowed from earlier cycles of work. Seeing repetition and reinterpretation as ways of mastering the handling of his subject matter, Kneihsl consistently drives the dissolution of concrete form ever further for the sake of fundamental or prototypical representations of the same. The only new pictorial motifs here are the wind turbines. Kneihsl presents them as a natural part of the landscape. And as with all his motifs, these propeller masts are also transformed into photographic projections of his inner visions; the original documentary character of the medium recedes to make way for the heightened expressive capacity of the photographic image.

The results of this process of transformative appropriation, which Zdenek Felix has called ‘alchemistic’, seem decidedly unagitated in comparison to earlier photographs; more meditative than expressive.[1] The formerly hard contrasts of black and white have softened considerably. Nuanced shades of grey preside over the image. There is even a definite attenuation of the previously coarse non-focus. Contours are clearly pronounced.

At the same time, the essential thing for Kneihsl’s creative work and the focus of his artistic interest is not the objective material of the photographed subject, but the hidden, intersubjective elements. The aircraft, the wind turbines, the sun betray his preoccupation with the loaded interaction of air and energy. Kneihsl’s darkroom engenders novel icons which carry themselves without a hint of retro-sentimentality, despite owing their existence to the traditional craft of photography. His most recent photographs even evidence a certain affinity with the formal principles of Apple’s head of design, Jony Ive: their format and framing actually draw directly on the appearance of the new iPhones. Much like Ive’s current digital version of the legendary Leica M camera, Erwin Kneihsl’s photographs, though only ever taken using analogue devices, are also contemporary reinterpretations of familiar subjects and highly refined ‘space gray’ products. The aesthetic counterpart and necessary balance to the casual elegance that emanates from these photographic works is provided in the ostensibly early modernist Raumkörper sculptures, which, for all their formal rigour, remain wooden, angular, and raw.

Erwin Kneihsl is editor of Schönheit und Vernunft– Zeitschrift für Fototheorie(Beauty and reason – journal for the theory of photography), which is published by Ich & Du.