Thomas Zipp The World´s Most Complete Congress Of Strange People 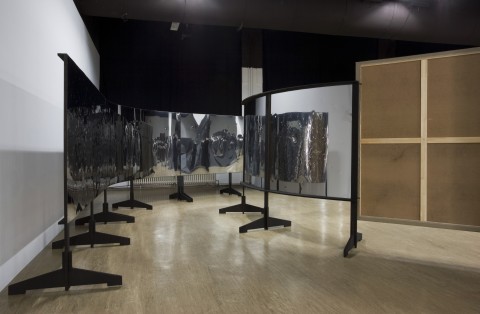 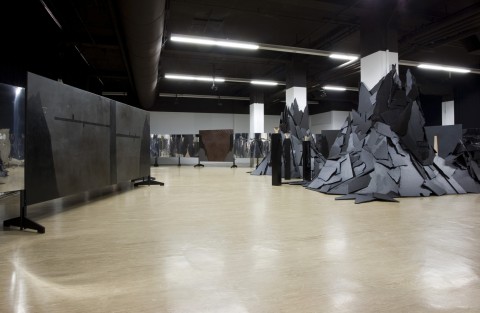 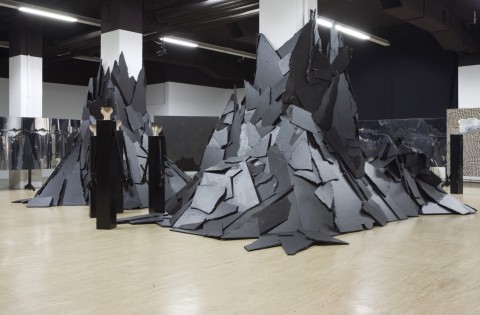 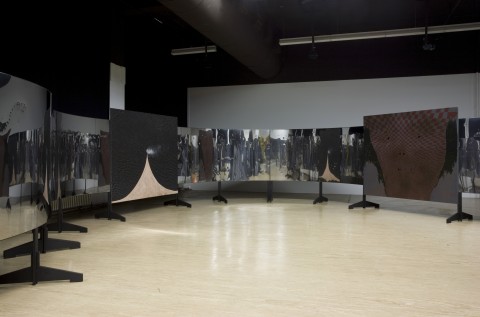 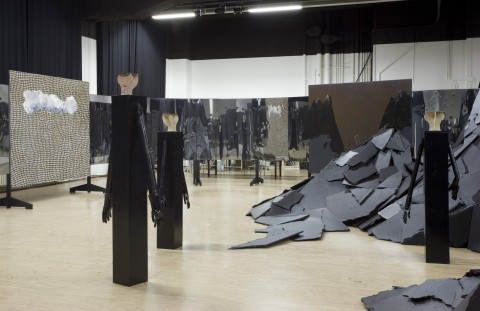 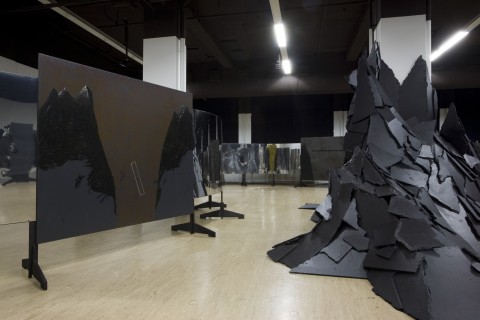 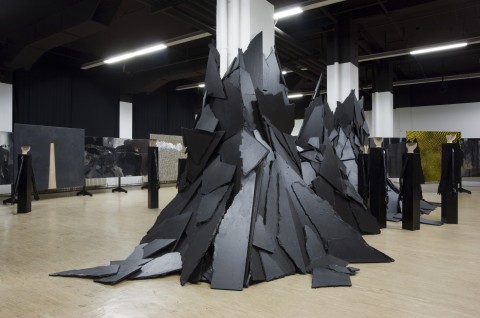 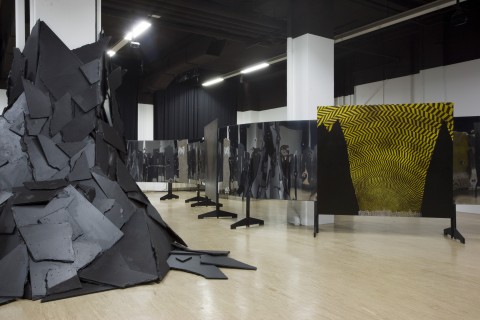 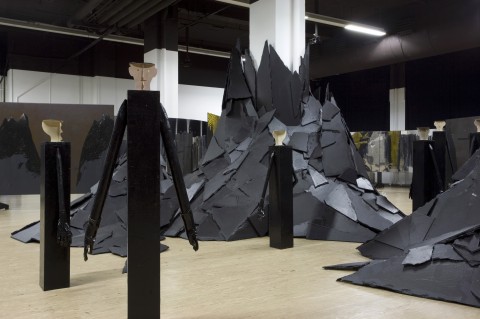 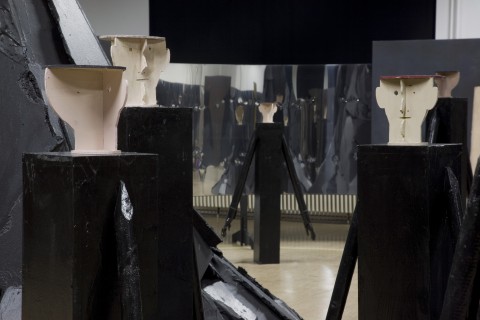 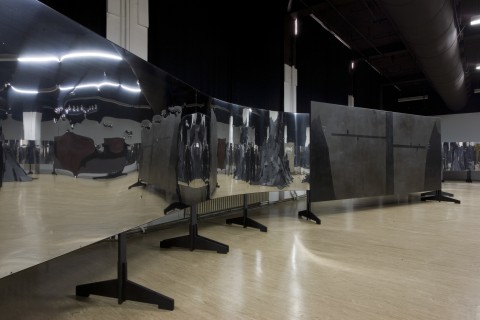 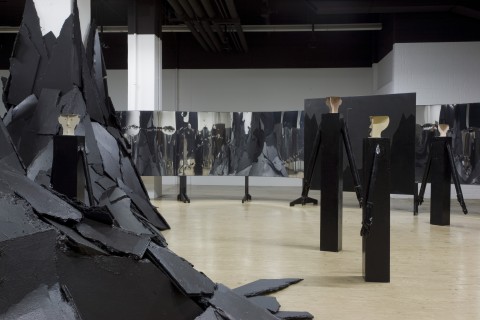 Galerie Guido W. Baudach is pleased to present The World’s Most Complete Congress of Strange People, its fifth solo-exhibition by Thomas Zipp since 2000. The artist, who was born in 1966 and lives in Berlin, takes his wide-ranging points of reference from art history, science, politics and psychology. Zipp uncovers hidden connections between these themes and deploys them with a playful sense of humour in his artwork. Conventional or canonical readings ofvarious systems of signs and meaning are called into question by consistent interweaving and superimposition. They are replaced by new chains of interlinked statements with their own unique logic. Zipp’s work can thus only be understood associatively and never by analysis alone.

For The World’s Most Complete Congress of Strange People, Zipp – and this is typical of his working methods – has dissociated himself from the existing architecture and created a spatial situation specific to the artworks. This contorted formation on stilts, which has, so to speak, lodged itself in the gallery space, draws the visitor through a narrow gorge and into the interior, where a different world opens up: a world of illusion and expanded (self-)perception. A steep wooden mountain rises up in the midst of this installation, dark and massive, coarsely put together from the wrecked chip-board that once made up the central wall of the gallery, and surrounded by a kind of wall of mirrors and images that continue the mountain motif in paint. The intermediary space is populated by nine existentially playful harlequin-sculptures who appear like strange
watchmen at a clandestine gathering. Their small heads, slotted together from wooden shapes rest on slender plinths that also serve as their bodies, with extra-long arms hanging down on either side. In his drawings, Zipp often emphasizes and animates the eyes of the subjects portrayed by covering them with upholstery tacks. One’s gaze is rebounded off these reflective surfaces and turned back on the beholder. The same applies, if in an incomparably more contorted and disfigured manner, to the concave and convex forms of the mirrored screens, which Zipp also sees as drawings – they are covered with cryptic messages in encoded letters and recall the partition-screen architecture of his touring exhibition of 2007/8, Planet Caravan? Is There Life After Death? a Futuristic World Fair. But it’s not just the beholder himself who’s reflected here; the sculpted mountain, the harlequins, the paintings, and the surrounding gallery space as such are also reflected along with him, so that a variety of levels are superimposed and drawn together into new images. Zipp playfully takes on the loaded symbolic content of the mirror here: the paradigmatic allegory of vanity and narcissism, but also of reflection and self-awareness, and, not least, also a picture of the human soul itself. Ultimately, then, anyone who visits Zipp’s psychotic hall of mirrors becomes a delegate at the World’s Most Complete Congress of Strange People just as much as the harlequins and the composer Karl-Heinz Stockhausen, whose portrait adorns the invite. The gaze, the image, and the exhibition itself are all subject to continual alteration.

The jagged and apparently inhospitable mountain landscape between the mirrors serves to reflect different states of human consciousness or spirit, and Zipp continues this in other ways. The skies are overlaid with patterns, which, like the contorted mirrors, have a psychedelic effect. Vision falters, it becomes unclear what’s there and what’s not, perception becomes unreliable. Against the backdrop of this uncertainty the ragged black shadows with their deep gorges and chasms, or forms that slowly ascend from the sides and come to a point at the centre, suddenly seem to be more than mere abstracted mountain landscapes; they can be read in terms of a sexual symbolism pushing up from the depths of the unconscious. And what becomes clear here, if not before, can ultimately also be said of The World’s Most Complete Congress of Strange People as a whole: the play with the psychological possibilities of reading and interpretation and constant referencing of the traditional cultural and historical symbolism of the mirror is consciously left open – a treatment of complex subject matter that is virtually paradigmatic of Zipp’s art.


Thomas Zipp is a professor at the Universität der Künste in Berlin. A solo-exhibition entitled MENS SANA IN CORPORE SANO will be on show at the Fridericianum in Kassel from March to June, 2010.