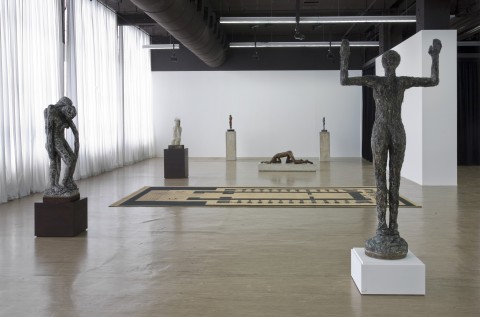 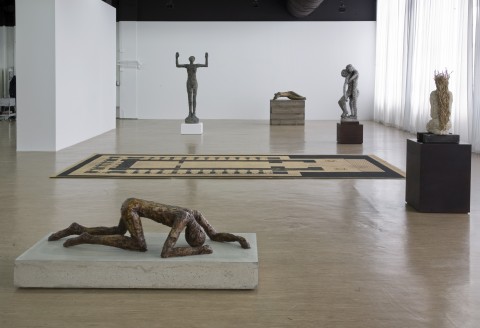 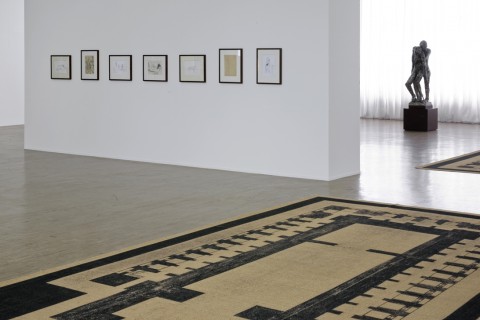 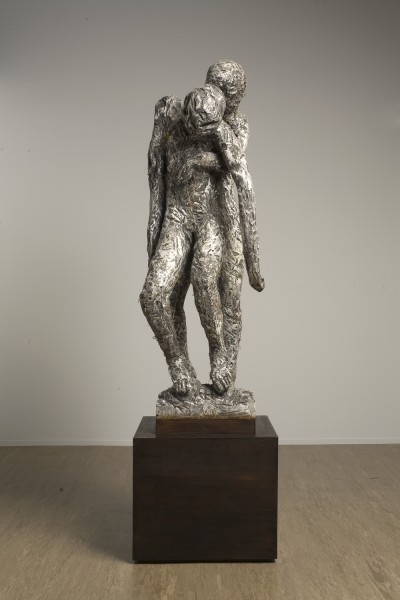 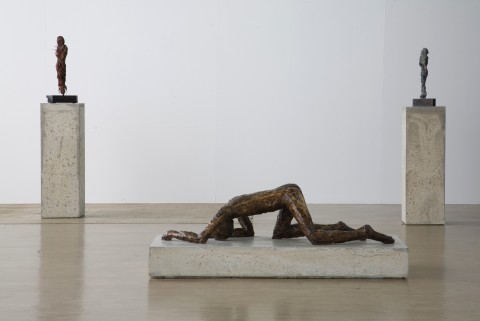 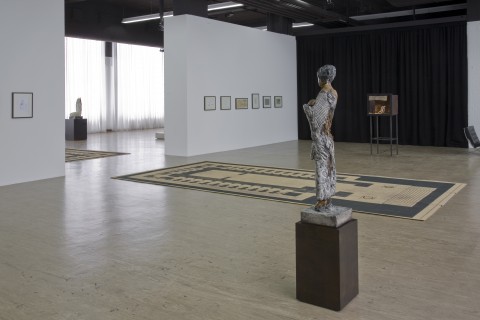 Galerie Guido W. Baudach is pleased to present Markus Selg’s third solo exhibition, following Amnesia (2004) and Traum der Sarazenin / The Saracen’s Dream (2007). The artist, born in 1974, living in Berlin, has always taken the individual work as his point of departure. Working in a wide variety of media – paintings, sculptures, computer prints and more recently also moving images – his integration of spatial structures and custom-made lighting systems began to precipitate comprehensive installations at an early stage. The universal and eternally recurring motifs of human history and mythology – creation, fall, perdition and resurrection – play a central role in these scenarios. Whilst Selg’s creative and compositional principles have hitherto been based primarily on the principle of collage or assemblage, his new works break with this approach in that the sculptures are now developed from drawings.

The exhibition Die Häutung – Muskel der Menschheit II / Shedding – The Muscle of Mankind II divides the gallery space into two halves: on the one side an object appears at the far end of the space in front of a black curtain: a small display case on stilts evoking a stage-like situation. Sterbender (allein) / Dying man (alone), as it is entitled, performs the lonely struggle with death, which is then taken on in the shadow of the figure as a Pietà. Drawings – sketched designs which, with tentative yet decisive lines, suggest and formulate the outlines of figures – hang on both of the dividing walls and, with the carpet in the passageway, lead to the other room of the gallery. Here, the two-dimensional designs are realized as sculptures, spreading the inevitability of death and the simultaneous hope of redemption across a wide spectrum. They take up the space, occupying it formally. Titles such as Ars Moriendi, Pietà, Betender / Supplicant and Trauernde / Mourner reflect the existential theme of the exhibition. Formally, Selg draws on the classical elements of sculpture and further develops them in the tradition of Modernism. Thus, for example, Corpus (Gestürzter) / Corpus (Fallen) and Sinnende / Contemplation recall the work of Wilhelm Lehmbruck (1881-1919). Selg’s sculptures are reduced to the essential; to archetypal forms of expression that are bound to neither spatial nor temporal structures and, precisely for this reason, emanate an idiosyncratic contemporaneity. As in the previous exhibition, the windows of the gallery are closed off with curtains: the view to the outside is denied and the viewer is totally exposed to the Selgian mise-en-scène. However, with the printed carpets in the passageway, the artist has introduced an element that provides a sense of distance in the context of the exhibition as a whole. Blick auf die Erde / View of the Earth, as this work is called, depicts an ornamental ground-plan of the Temple of Solomon and thus stands for a detached, divine perspective; for a survey of the panorama of human life that is proffered by the sculptures.

The title of the exhibition can be taken to refer to both the form and the content of the sculptures. Die Häutung / Shedding is here understood as a moment of defencelessness; as a naked and vulnerable state in which the human body is put at the mercy of fate. Moreover, though, this process represents a liminal situation, a new beginning. This renewal, which goes hand in hand with shedding, the casting off of an old shell, and the resultant transformation of external form, can also be seen on a formal level in Selg’s new work. In the sculptures shown in the exhibition, Traum der Sarazenin / The Saracen’s Dream in 2007, forms were still cast and put together as figures; painstakingly worked up as embellishments and ornaments, created as smooth surfaces of variegated colours. Now, though, Selg liberates his sculptures from any sort of adornment and opens up a view to their essence. Trauernde / Mourner alone – the oldest of the sculptures here – brings the two approaches together, whilst clearly marking the transition to a new phase. Rich garments yield to rags, the form becomes coarser and the surface begins tear. Despite the consistent use of plaster, straw, jute and metal, the individual objects are always quite different in terms of their materiality. Thus the Pietà seems to be chiselled in stone, Ars Moriendi as though cast in bronze, and Sinnende / Contemplation might have been carved in wood. The raw, almost flesh-like body of this figure seems to translate the exhibition title almost literally. Figuratively speaking, though, shedding is a process of onward development whereby the old is cast off in order to make room for the new: a principle that Selg continues to pursue in his artistic practice.

From 1996 to 2000 Markus Selg was part of the Akademie Isotrop, of which he was a founding member.