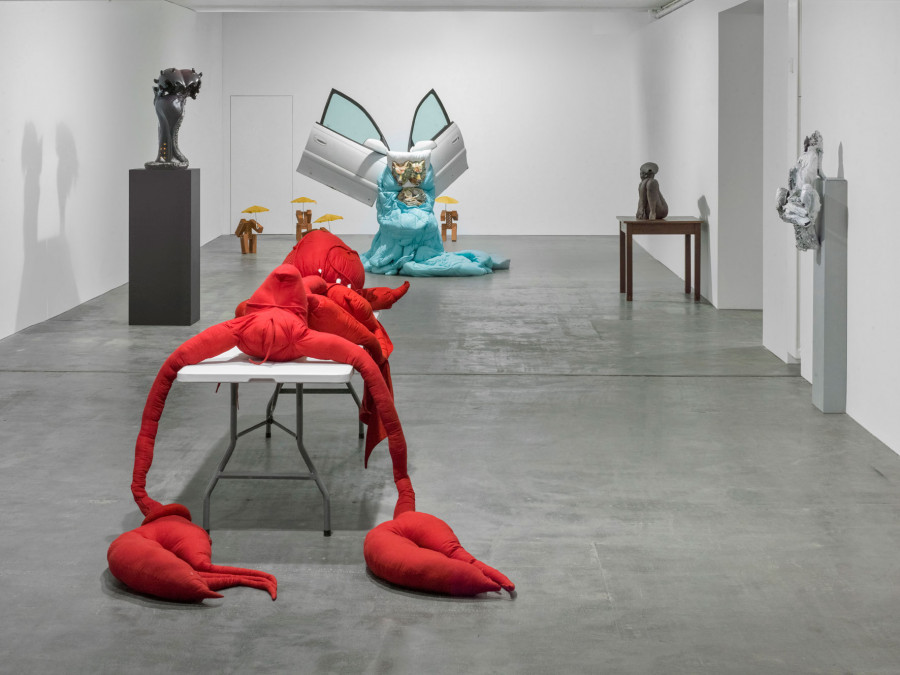 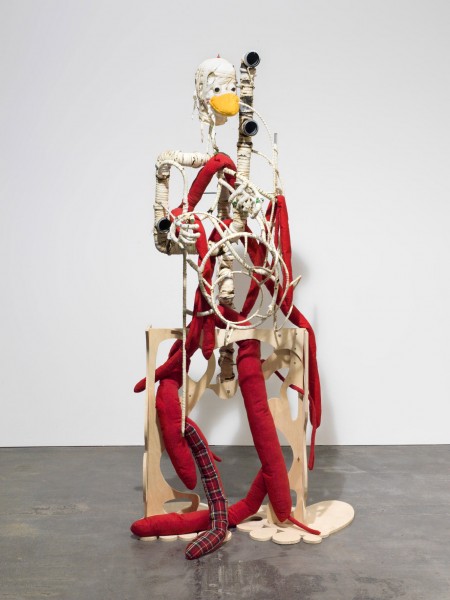 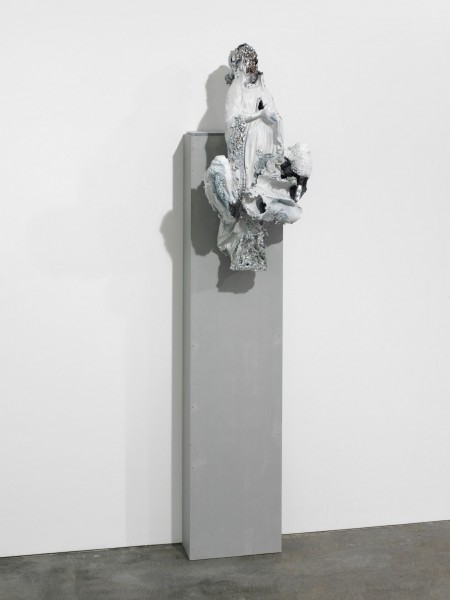 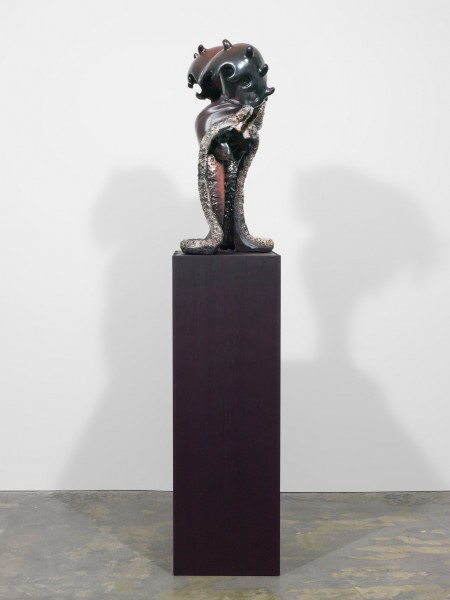 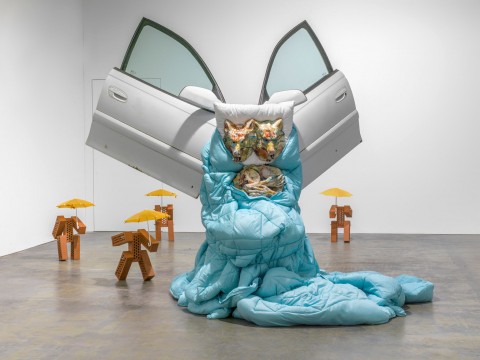 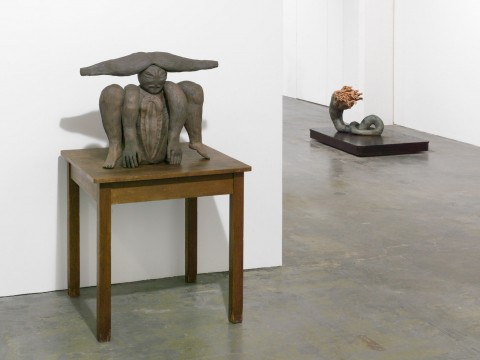 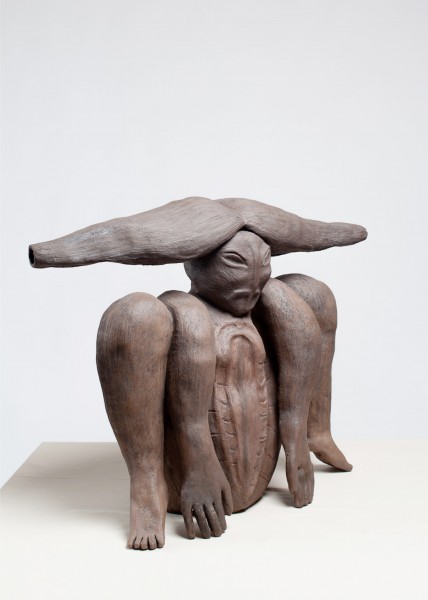 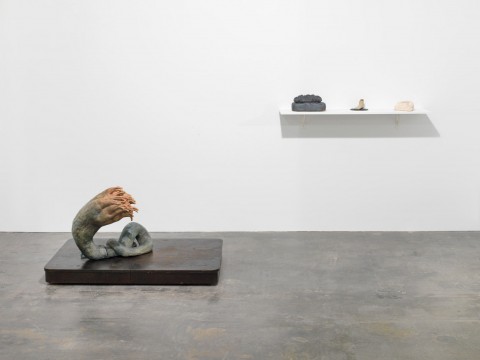 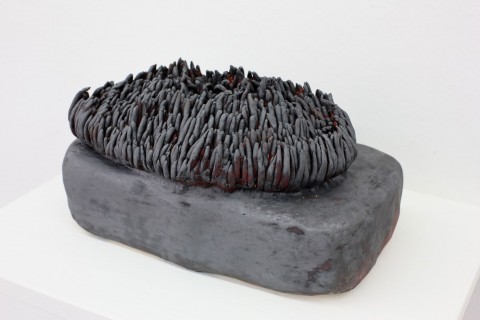 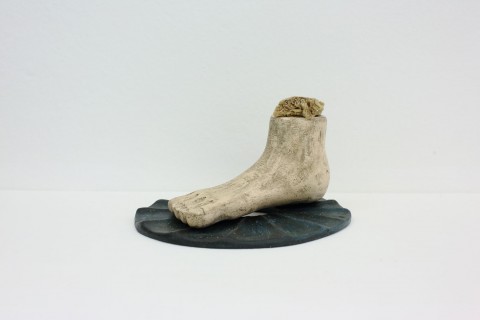 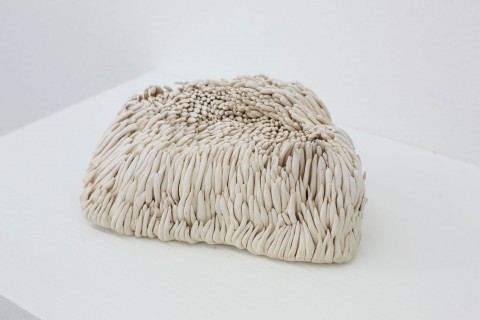 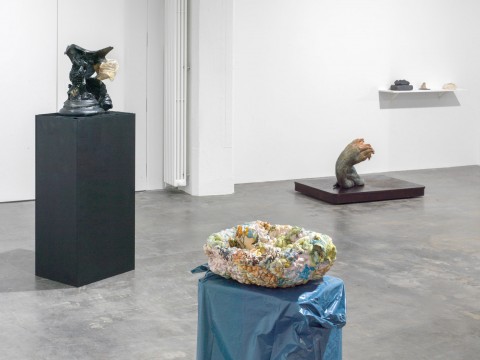 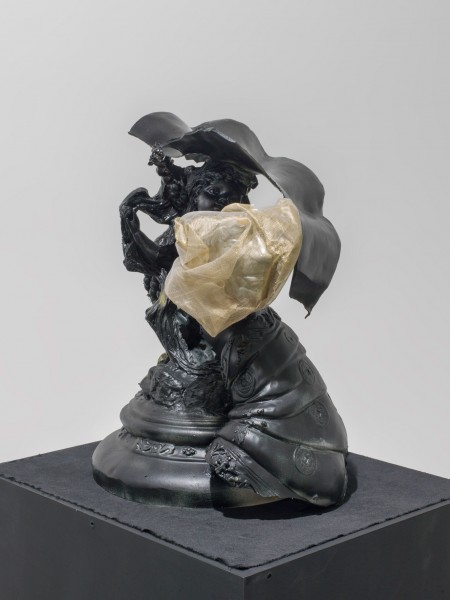 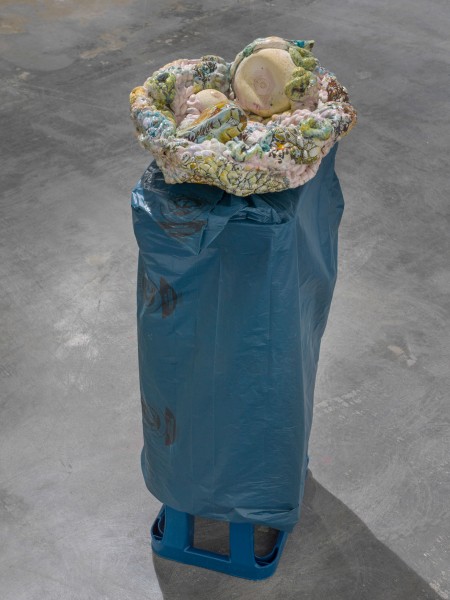 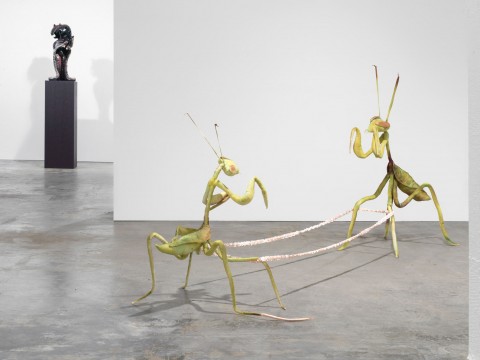 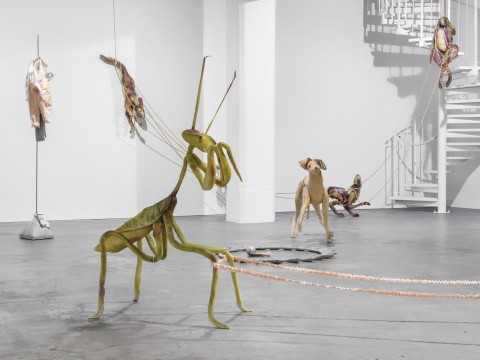 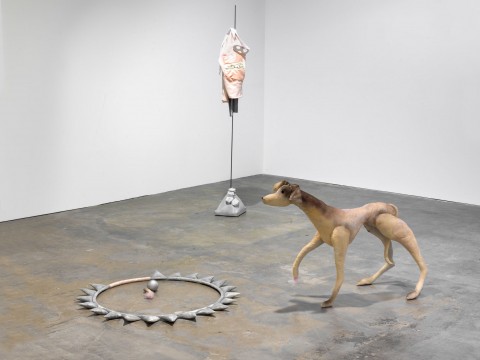 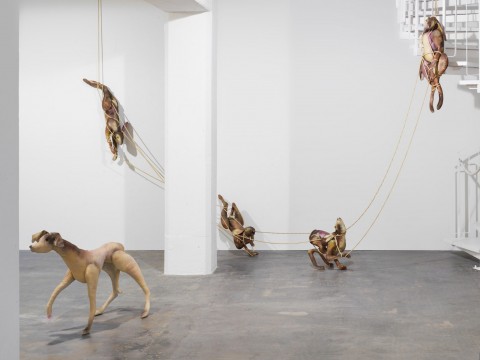 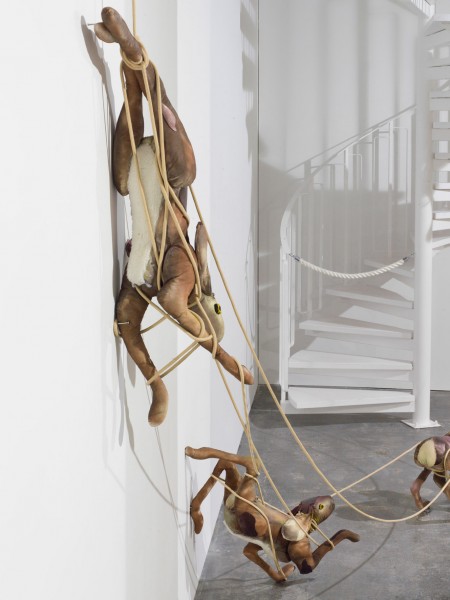 The term „metamorphosis“ comes from ancient Greek and means transformation, mutation, transfiguration. In the field of biology, it describes the controversial, multi-stage development of certain living beings such as frogs or butterflies, developing from a larva to a fully-formed creature. In the process of transformation, the initial gestalt morphs into a completely new identity.

In his long narrative poem Metamorphoses, completed around the year 8 AD, Roman poet Ovid tells of the transformations of gods, heroes, humans, plants and animals. Ovid’s guiding theme is the idea of an essential transition from one state to another; his poetry transforms ancient myths into epic scenes, such as that of the nymph Daphne transforming into a laurel tree in order to escape the god Apollo, who was aggressively pursuing her. Ovid sees the human existence as determined by the consequence of mutual, interdependent entanglements between all living creatures and the gods – a poetic fiction of an all-encompassing cosmic order.

The term „metamorphosis“ was reborn in the context of Surrealism. In keeping with the Comte de Lautréamont’s famous musings on how “the chance encounter of a sewing machine and an umbrella on an operating table” can stir up unexpected affect and visions in the viewer, the Surrealists wanted to destroy the usual interrelations through juxtaposing things that are alien to each other’s nature in order to free our unconscious and hitherto unknown levels of imagination. The purpose of the resulting images, suddenly laden with new unexpected contents, was to counter and subvert the seemingly logical structures of the usual ways of „seeing“ and to offer a surreal, clairvoyant mode of perception instead.

In his Second Surrealist Manifesto, written in 1930, André Breton declared: „May the devil keep the surrealist project from ever wanting to forego metamorphoses.“

The artists in the group exhibition Metamorphosis are not really concerned with the relations between the mythical and the secular nor with the surrealistic irreconcilability between consciousness and the unconscious. In their works however each of them deals in their own individual way with transformations of forms, materials, bodies, ideas and substances. The focus of the exhibition’s curation lies on the three-dimensional works by the participating artists, which highlights the specific role of transfiguration as a creative principle in each individual work. The selection comprises five contemporary positions from five European countries.

Habima Fuchs (born 1977 in Ostrov) is a Czech artist working in sculpture drawing and ceramics, film and installations. She lives between the Czech Republic, Germany, France and Italy, basically leading the life of a cultural nomad. Her work is inspired by myths and legends of different origins and is mainly concerned with their spiritual content. Her „futurologists“ take the position of meditating Buddhas. In the ceramic sculpture Pratyupanna (2014), exhibited at Baudach Gallery, a large snake with tentacles morphs into a menacing creature that resembles a sea anemone. Ultimately the snake’s body transforms into 84 individual parts. This multiplied body, the artist says, allows for a „better and more complex perception“ of the environment. In Transformations / Wild Abundance (2012), a crouching female figure undergoes a more „human“ metamorphosis: with her masklike face, carrying her over-dimensional sex like both a spear and shield, she is the „baubo“, both a fertility idol and a demon all at once.

The German artist Thomas Helbig (born 1967 in Rosenheim) works in painting, drawing and sculpture. His early works make use of the formal potential of modernity, playing with its vocabulary of forms while simultaneously deconstructing it. The collaged sculptures he has been creating in recent years display a different kind of transformation of the materials. He picks discarded, discarded commodities from the waste of civilisation as well as from the shelves of department stores that sell kitschy sculptures, vases or plastic toys, and uses them for his art. Helbig takes them apart, cutting open the mostly hollow forms and welds the fragments into new objects that he then paints. Recognisable elements such as hands, heads, breasts, or feet appear alongside fragments of anonymous figures, toys and masks, producing assemblages bearing a strong symbolic resonance. While their features vaguely testify to their past, they obscure it and point to new connections. References to Star Wars as well as those to the formal vocabulary of South German Baroque, which Helbig is connected to by virtue of his biography, abound in his work, giving rise to an impression that his latest sculptures emphasise through their use of colourful textiles such as red velvet. But it is not a feeling of religiosity that these sculptures evoke, rather, it is a kind of absurd humour reminiscent of Giorgio de Chirico’s „metaphysical landscapes”.

French artist Renaud Jerez (born 1982 in Narbonne), who lives in Paris and Basel, has made a name for himself creating disturbing installations and assemblages made of metal, wire, lead pipes, insulated cables and other industrial materials. Although he does indeed reflect on the „virtual realities“ of the internet, his sculptures primarily focus on matter that can be perceived by the senses and intend to reveal their structures. His main concern, he says, is „bodies contaminated by consumerism“, at the root of which lies the production and consumption of video games, science fiction films and computer-generated avatars. Jerez find the inspiration for his works in everything that is unleashed en masse by virtual imagination. He works in stark contrasts, creating the „cyborgs“ of these virtual worlds out of civilisational residues and rubbish, while revealing the biological infrastructure of human bodies qua machines, that, virtuality notwithstanding, still operate as interfaces between humans and the world. In their metamorphosis from one state to the other, Jerez‘s androids and robots point to their biological past, but also reveal a dystopian model of an inverted evolution, in which man-made commodities become emancipated and transform into a strange anti-world.

The Estonian artist Kris Lemsalu (born 1985 in Tallinn) is a ceramist and primarily works with media installation and performance. In a performance she staged at Frieze New York 2015, she spent several hours lying on her stomach under a huge ceramic turtle shell, with only her naked feet, hands and a shock of hair visible – a manifesto of solitude, isolation and repression of the individual in today‘s society, and especially the commercial art word. The sculpture exhibited at Galerie Baudach, titled Car2Go (2016), is a complex installation that comprises several parts. At first you read it as a kind of “angel“ figure, its metal wings made out of the two side doors of a car. Its „body“ is covered with a blue bedspread and in its upper middle section are two wolf heads made of ceramic, beneath which are two shapely nude female breasts held by two hands – a contrast that evokes religious as well as existential connotations. Nearby, small figures holding yellow umbrellas in the area are an indirect reference to the pro-democracy “Umbrella Movement“ in Hong Kong. A funeral procession in Sri Lanka that Kris Lemsalu witnessed in her travels also echoes in the installation. When Car2Go was first exhibited, the artist developed a performance around it, hugging the angel figure tightly and letting herself slowly slide down to its feet, in what would be a nod to a tragic gesture, reminiscent of Mary at the feet of Jesus on the cross, or a commentary on the current political situation.

Mary-Audrey Ramirez (born 1990 in Luxembourg), hailing from Luxembourg and  living in Germany, studied multimedia at the University of Fine Arts in Berlin. Sculptural works and installations are the focus of her interest. For her earlier two-dimensional images she had developed a special technique, using a sewing machine to create lines that formed structures, on canvas or burlap. The lines grow spontaneously at first, and gradually transform into legible arrangements and scenes as the sewing progressed. They form enigmatic scenes populated by humans and animals, merging into one another and shifting identities in metamorphic encounters. Life, empathy and sexuality encounter violence and death, animals attack and devour one another, but these gloomy scenarios are playfully disrupted and transformed into fairy tales. The sculptural works she has been creating since 2013 are for the most part concerned with the transitions between human and animal form. In her research, Mary-Audrey Ramirez discovered the (still vital) world of various folkloric traditions in different parts of Europe, especially the masks and costumes worn in rural carnival rituals and on Shrove Tuesday that aid the transformation of people into animals, plants and wild spirits. This inspiration is referenced in some of her performances and sculptural works. Ramirez conjures up a diverse cast of large and small animals to populate her universe – flamingos, pelicans, pot-bellied pigs, tapirs, skates and foxes, who take on ambiguous roles in a kind of phantasmagoric Alice in Horrorland. They engage in human behavior, but remain in their own animal world, which is ultimately why they end up having the upper hand over humans.