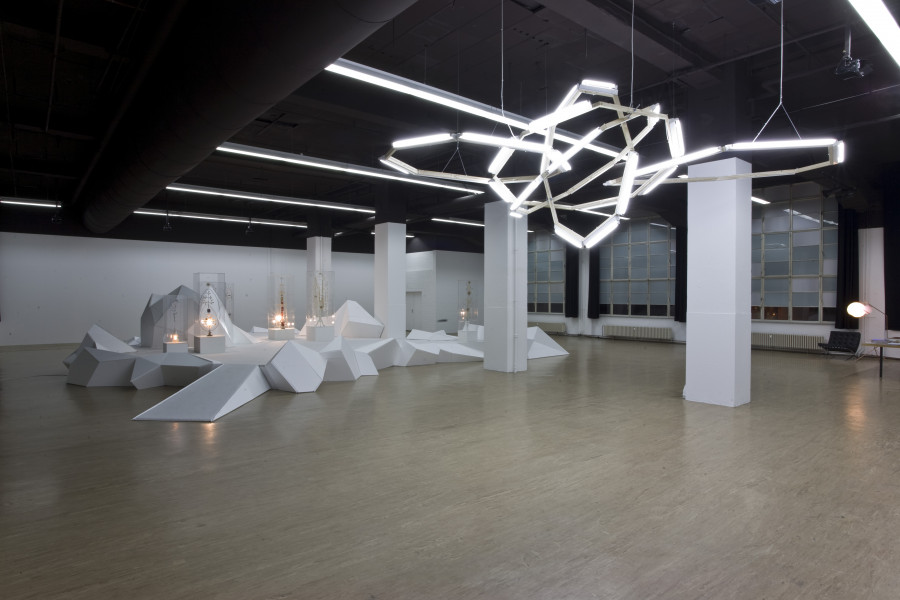 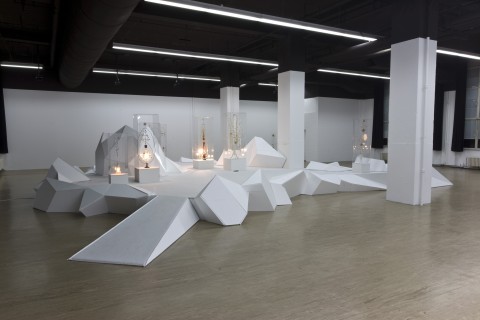 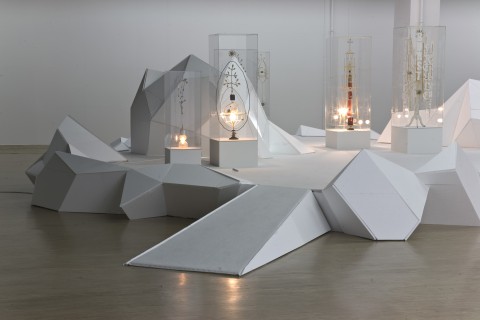 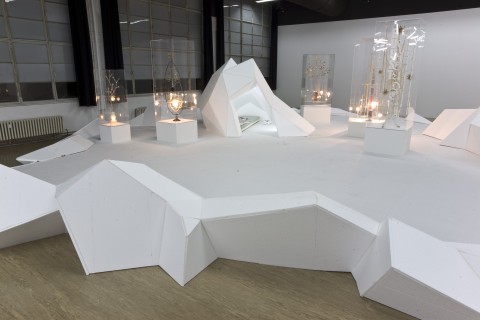 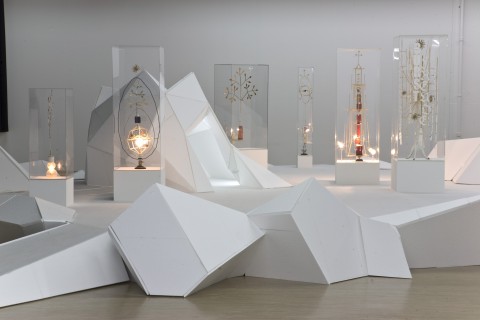 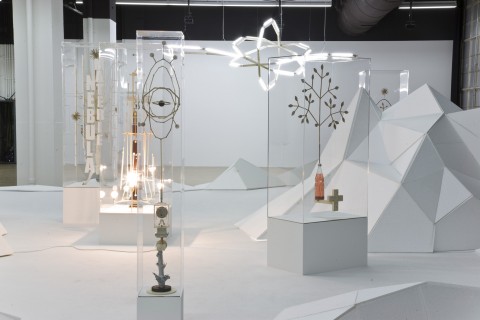 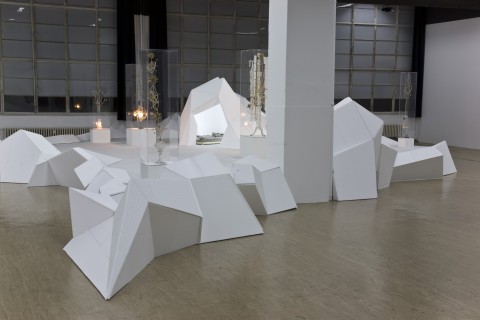 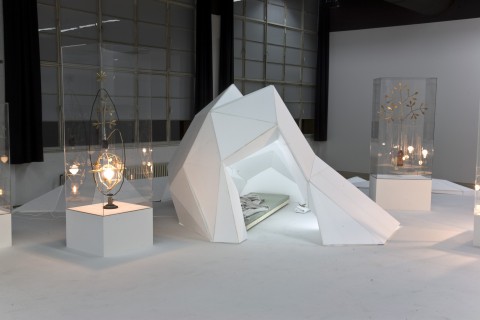 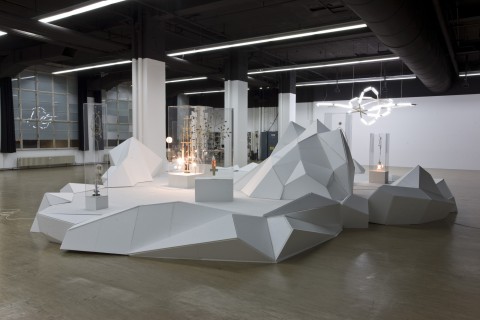 Following Im Krypton (2004) and The Milky Way (2007), the Guido W. Baudach Gallery is delighted to present its third solo exhibition by Björn Dahlem. In his work, this Berlin-based sculptor, who was born in 1974, draws thematically in equal measure on physics and astronomy, and on the realms of philosophy, religion or science fiction. Dahlem fuses both concrete and imaginary cosmologies to forge fantastical theoretical models, which, rather than aspiring to depict a faithful illustration of any specific phenomena, allude to the narrative potential of their inherent world views. These complex, frequently abstract intellectual constructs usually find their material expression in fragile, often seemingly weightless structures, fashioned from mundane DIY materials and quotidian items.

In this current exhibition, entitled The Island, Dahlem transforms the gallery into an “architecture of the heavens”. Its central object, a crystalline-shaped island, expands meanderingly across the room. Attended by a small rock formation and a “dwarf galaxy”, it bespeaks the “grand totality”, namely the universe. This island, an elevated plain, harbours various self-contained “holistic world models”, presented in glass display cabinets, which thus become interconnected. Common to all these works is that their titles, such as Himmelsglobus (Das Weltall), Milchstraße or Geist, deliberately avail themselves of phenomena or concepts, which by virtue of their universality and high degree of abstraction remain somewhat elusive. This intention is clearly illustrated in the work Geist, which boasts a conglomeration of such terms as “Nebula”, “Pseudologia”, “Mysterium”, “Freude”, “Mare Crisium”, “Black Hole” or “Materie”. The objective of assigning these concrete names is not to furnish a categorical explanation of the work, but rather to reinforce the complexity of levels of meaning in art, to forge a potential openness, which, notwithstanding ostensibly irreconcilable contradictions, strives to “dis-close” the world. For even the island itself, replete with its myriad sub-units, only forms part of a very much larger mysterious universe. What at first glance appears as a representation of scientific phenomena, quickly reveals itself to be a platform, on which Dahlem is negotiating something very different: namely, the hermeneutic notion of achieving an holistic understanding of the world, in which science and art – usually perceived as two distinct systems of knowledge– merge. Science here is applied as an instrument to observe nature, and is possessed of the capacity to highlight the creative principle, the wonder and the beauty of the natural world. From this perspective, the central and titular motif of the exhibition, The Island, can be interpreted as a place of retreat, refuge or a projection, and thus as a romantic topos par excellence. And it is no coincidence that this island – built from polygonal Styrofoam elements – not only resembles a futuristic, spaceship-like, rescue capsule, but is also reminiscent of Caspar David Friedrich’s painting The Sea of Ice (The Wreck of Hope) from 1823/24.

The legacy of the Romantic era and its consequential manifestations in the art of the 20th century, such as Joseph Beuys’ “extended concept of art”, who set out to re-unite the “cold” and the “warm” poles of the world, namely science and art, following a long period of supposed disjunct, are equally reflected in Dahlem’s works, as is the modernist project of transforming banal items into something sublime by transferring them into the context of art. Here art and science, creativity and rationalisation coalesce into a harmonious, synthetic entity. Dahlem’s presentation in the gallery may be read as a kind of symbolisation of this principle: the crystalline form of The Island reflects the cold pole, the cosmological models in the display cabinets – enshrouded by a mysterious aura – the warm pole. Yet at the same time, they appear in the round as a vast entity, in which the small and the large units continually form a structural complement to each other.